The Ethereum price is up 4.3% in the last 24 hours, following the general market sentiment of the crypto market. In anticipation of today’s speech by US Federal Reserve chairman Jerome Powell at the Brookings Institution, crypto bulls seem to be anticipating possible dovish comments.

At press time, Ether () was trading at $1,265, with trading volume continuing to fall to just $7.8 billion, down about 2.8% from the previous day. With the current move, Ethereum has managed to break through the key resistance at $1,230.

As NewsBTC reported, resistance at $1,288 (on ) is now up for grabs before the first major resistance is encountered at the $1,300 level. In addition, investors should keep an eye on the $1,330 level as this is the threshold to recoup losses from the FTX crash. 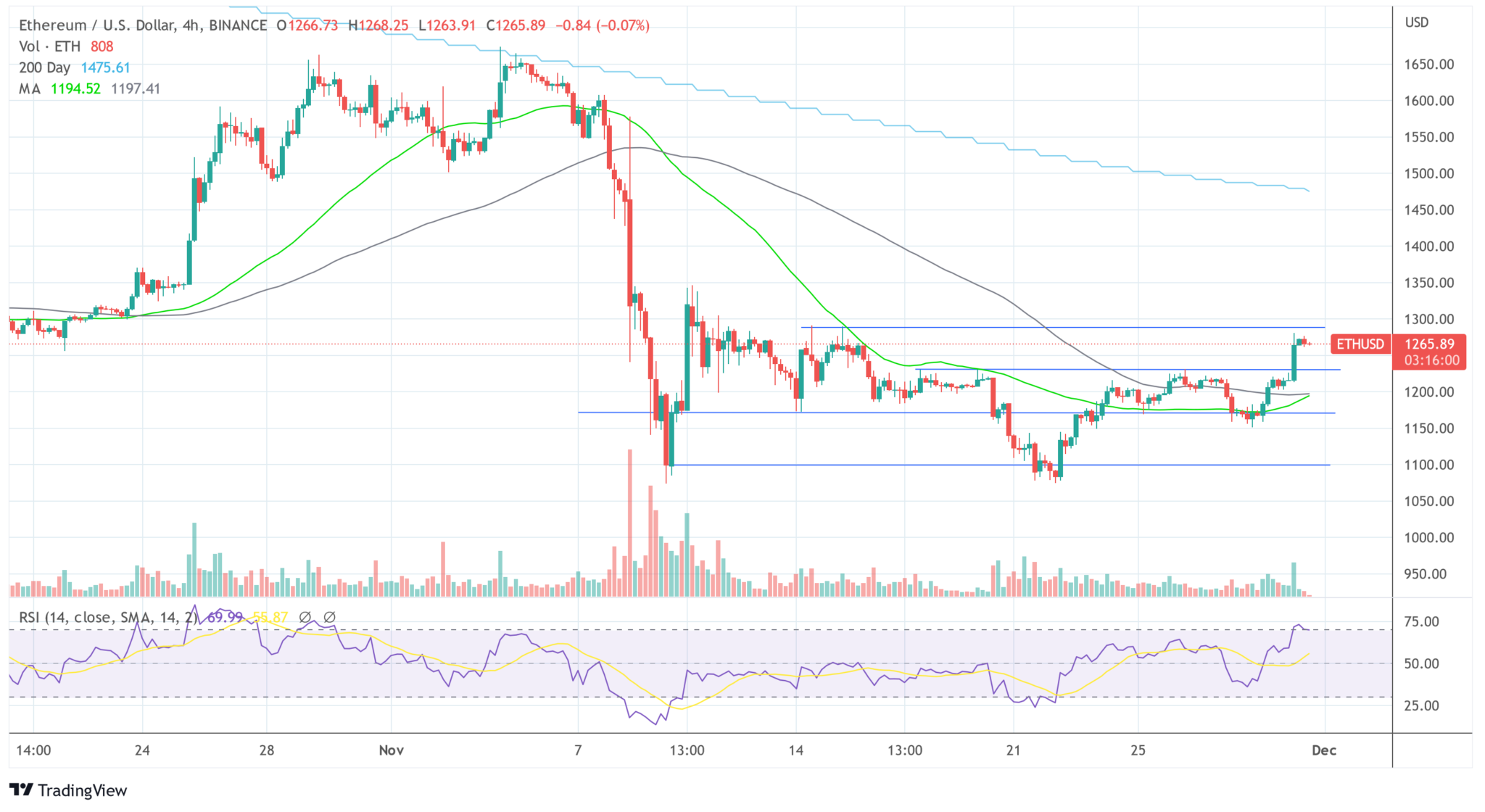 Meanwhile, data from Santiment is backing the bullish case for Ethereum (ETH). The on-chain analytics firm shared that Ethereum’s large key addresses have increased since the FTX debacle in early November.

In the chart below, the key moments when “sharks” and “whale” addresses accumulated and dumped ETH can be seen. The number of 100 to 100.000 ETH addresses is at a 20-month high, while the price is still lagging behind.

The whale and shark activity could thus be a harbinger of a further upward trend. 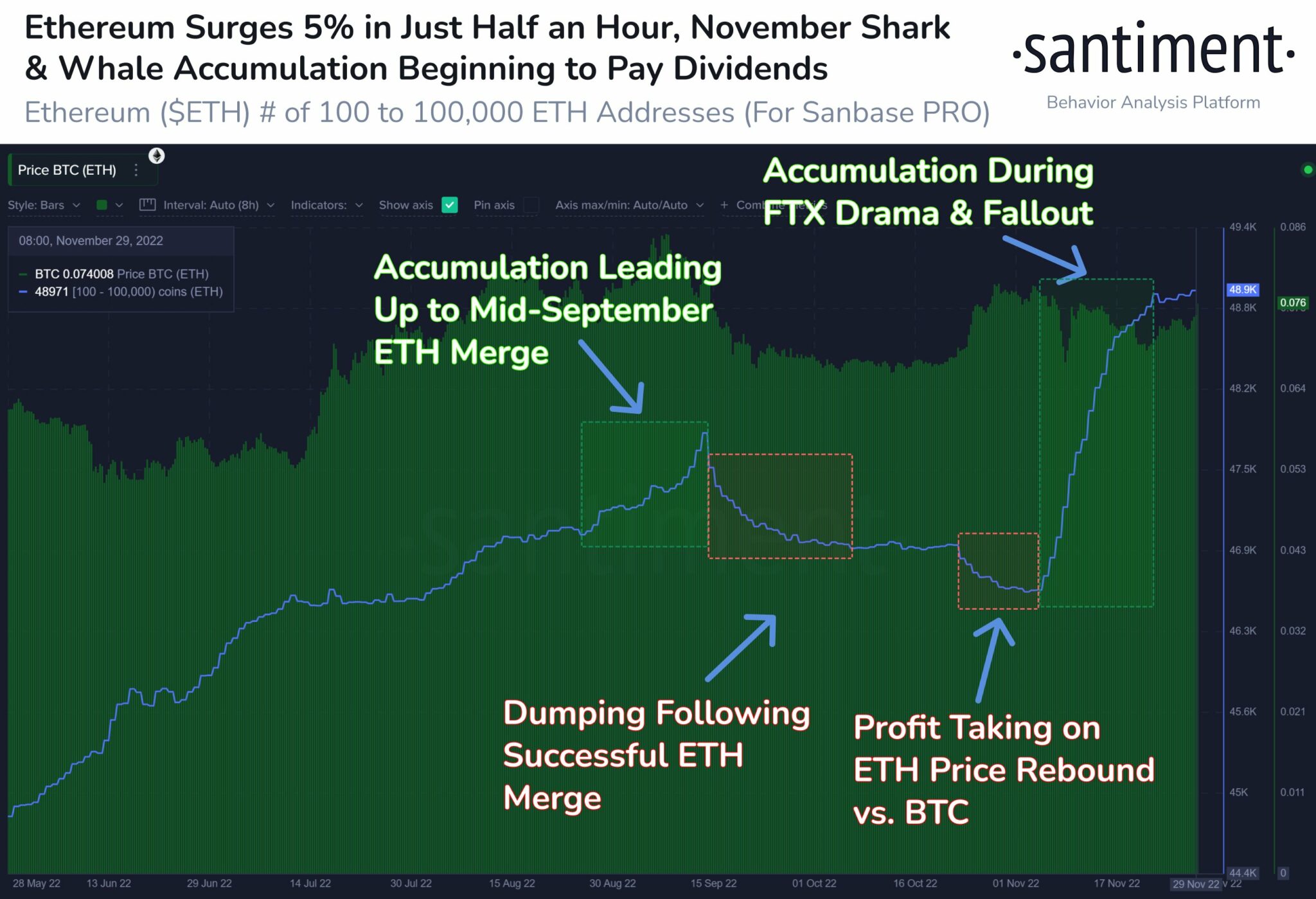 But there is also second on-chain indicator which is showing the strength of Ethereum bulls. As Santiment also reports, the number of active addresses rose yesterday to the highest level in over six weeks, “that likely factored into today’s price growth”.

On October 15, the last time the number of addresses was this high, the price of ETH increased by 30% over the next 3 weeks, the company analyzed. 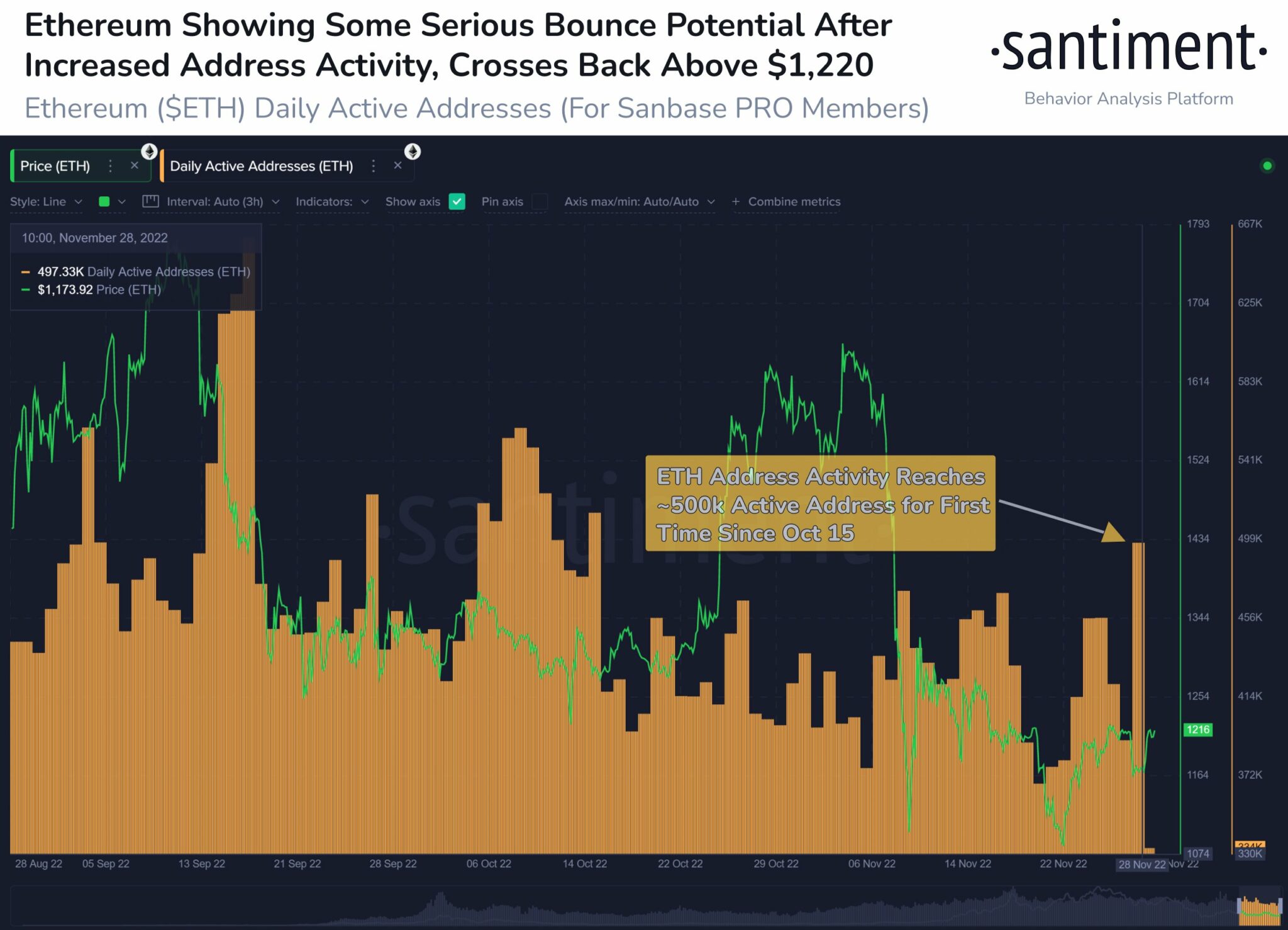 In this regard, the on-chain analytics service “Lookonchain” has noted that one whale has been particularly aggressive in its buying behavior. The ominous whale bought ETH after the FTX/Alameda crash, a total of 17,225 ETH since Nov. 8, the equivalent of about $21.25 million. The average price was $1,234.

On the other hand, the founder and CEO of 10T Holdings and Gold Bullion, Dan Tapiero, shared a simple but very bullish observation in the Ethereum chart via Twitter – something Bitcoin (BTC) has failed to do:

I want to be very clear here. The fact that Ethereum could not make a new low in price in the face of the most negative news (Ftx fraud) of the year is extremely bullish for Eth going forward. Yes, sometimes it is that simple.